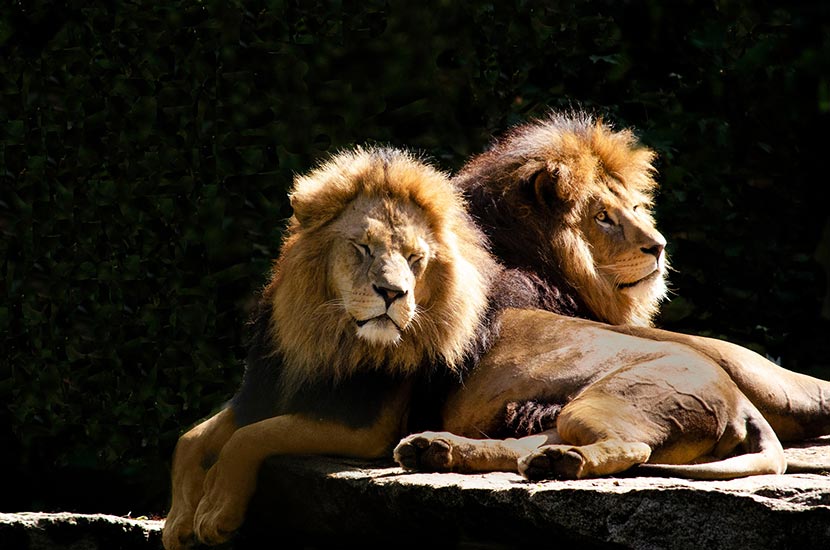 I’ve always been amused by this Proverb. Who has ever seen a lion out on the street?! Perhaps in the days when this was written it may have been a little more common, but I suspect to make his point, the writer made up something farfetched to emphasize that a lazy person will make up any excuse to get out of work. Not being a lazy person, I pretty much have let this proverb slide past – until now.

They say that the COVID-19 social distancing measures can led to more vivid dreams. I can attest! I had a super weird one the other night… here is the gist (this gets a little heavy but hang in there.)

My Dream of Two Lions

I saw a lion walking through the streets. He was huge, perhaps 10 feet tall, confident with each step. His powerful shoulders made a lasting impression on me. He was like an African lion, without a splotch or blemish on his coat. Though calm, his size and strength terrified me. I quickly sought cover inside a building.

No sooner did I begin to relax when another lion came on the scene, creeping through the door of the building where I hid. He was big as well, but didn’t have the same stature. His coloring was much different; large white patches cut by tiger like black stripes covered his shoulders and neck. As I watched him, a sense of distrust came over me adding to my fear. Suddenly I saw a group of smaller lions, cubs perhaps, running around. In an instant, the multi-colored lion snatched one of the cubs in its teeth. Kicking and screaming the little cub tried to escape but the lion’s grip was too strong. Turning its head to face a large disposal chute, to my horror, the lion dropped the cub in! Never to be seen again. The other cubs scrambled to hide, fearing for their lives…..

Of course, that’s when I woke up (doesn’t it always happen that way?) “What was that all about?” I wondered as I lay in bed. Wow… I figured it would leave me quickly like most of my dreams do. It lingered. A few days later, during my devotional time, I decided to ask God if there was anything to it (you never know with God!) Proverb 22:13 came to me. My vivid dream makes me appreciate the terror of a lion on the loose. I wouldn’t want to go out if there was a lion outside…the idea became real to me.

I realized that there actually is a lion out there, maybe two!

My Life Mission is “Unlocking Lives-Guiding Futures”. Pursuing this as an advisor and coach, I have come to realize that all of us have lingering, deep seated desires that produce thoughts and questions like: “There has to be more to life than this!”, “I’m here for a reason – What is it?”, etc. You’ve probably had these come to your mind at some point. I tell you this – they will not go away. I believe God himself has planted these desires within us so that we seek him. What I’ve struggled with is this: “Why don’t people do something to answer these desires?”

Sure, plenty of people talk about finding their purpose but it seems to stop there for most. The proverb calls out the lazy. “Are people lazy?” I wondered. Some are for sure, but I have seen plenty of ambitious people stumble to get going in spite of wanting to make a difference. “There must be something else,” I thought. That’s when my dream began to make more sense.

There is a lion outside….and something that appears to be a lion inside.

The Bible speaks a lot about lions. In fact, Jesus himself is referred to as the Lion of Judah.

“But one of the twenty-four elders said to me, ‘Stop weeping! Look, the Lion of the tribe of Judah, the heir to David’s throne, has won the victory. He is worthy to open the scroll and its seven seals.”’
Revelation 5:5 (NLT)

As I thought about that first lion, Jesus came to mind. Confident walk, powerful shoulders, stature of a king. So powerful in fact, that my fear was understandable. Yet, his sense of calm strength brought a desire in me for him. The image of this lion still lingers in me. Strangely attractive, this first lion was truly a lion, an unblemished king. After seeing the other lion, I wanted to be on the side of this powerful noble. Having made this connection, I knew that this lion, the lion of Judah, was calling me to come outside where I would come under his protection. He was not the lion outside that might kill me. He wanted me to stand with him.

I thought a bit more about the other lion. Interestingly, I was actually inside when I saw him come in from the outside. What also puzzled me was his splotched coat; made me think of him as impure, tainted. Certainly, he was scary. Watching him terrorize and discard that little cub was disturbing. Another scripture came to mind:

“Stay alert! Watch out for your great enemy, the devil. He prowls around like a roaring lion, looking for someone to devour.”
Jesus Christ in 1 Peter 5:8 (NLT)

The devil, tainted and impure, was thrown from God’s presence. Now on Earth, he prowls. A true lion? No! “Like a roaring lion.” Pretending to be a lion, our enemy is out to devour us little cubs to keep us from getting outside. Crafty, the false lion knows that he must get at us before we get outside under the power and protection of the King, the lion of Judah. I can still feel the terror that made me squirm and hide as I watched him snatch the little cub. Cowering, it made me forget about the lion outside. Isn’t this the way fear works?

A lie…. The twisted truth. The tried and true method of your enemy.

Back to those who seek to answer the desires God has planted within them. Not lazy. Victims of the false lion’s spin are like this:

The false lion’s spin of the truth emasculates boldness.

“The wicked run away when no one is chasing them, but the godly are as bold as lions.”
Proverbs 28:1 (NLT)

Jesus warned us to stay alert. The false lion works to get us to believe his twisted truth so we disobey God. When we disobey by denying God’s truth, we become the wicked who run away when no one is chasing us.

There is no lion to fear outside!

We are called to be bold, to make the break to the outside so we can live under the leadership and protection of the great lion, the lion of Judah. This is where we experience God. This is where your adventure is lived.

Move deliberately, swiftly, with incredible focus on the true lion outside lest you find yourself trapped inside in the grip of the false lion. Take notice of the new, vibrant future of the Kingdom of God. Be bold and enter into the Adventure God Made You For. Let’s talk.