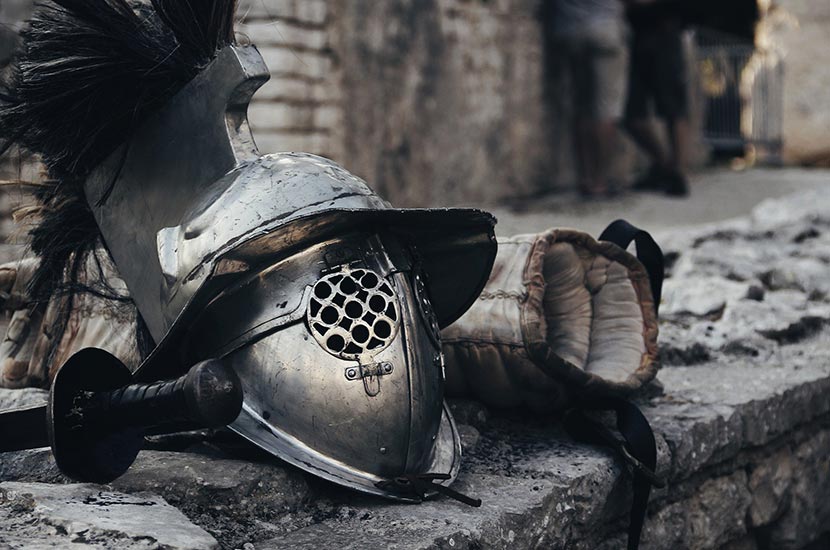 Are you prepared for the fight of your life?

One of my favorite scenes is in the movie “Gladiator.” Russell Crowe stars as roman general Maximus Decimus Meridius, who became a gladiator following a failed attempt on his life by Commodus, the son of Emperor Marcus Aurelius who had just died. Maximus was an incredible warrior – smart, fit and well trained. He quickly gained fame as the “Spaniard”, though his true identity was hidden by his helmet. In this scene, after defeating all the enemy combatants in front of an overflowing crowd, the now Emperor Commodus comes to the arena floor and asks him to remove his helmet to reveal his identity. Maximus was focused. He’d been waiting for an opportunity to kill Commodus and restore the empire to its former greatness. Showing great restraint, and in dramatic form he reveals his true identity, confronting his enemy, but sparing his life at this time. So powerful! If you haven’t seen the movie it’s worth watching.

While the climax of the scene is exciting, there is a bit of “behind the scenes” work that is quickly taken for granted. Gladiators, a substantial investment for their owners, were highly trained for the fight that awaited them. There were actually gladiator schools where they trained physically, learned fighting skills and interestingly, they were even fed a plant-based diet (barley, beans, oats and fruits – No meat!). They were groomed for top performance – to be at their peak for the fight of their life.

Every think that you are to be a “gladiator for God”? Are you groomed for top performance – to be at your peak in the fight of your life? The apostle Paul often used athlete analogies to make a point about how God views things:

“Don’t you realize that in a race everyone runs, but only one person gets the prize? So run to win! 25 All athletes are disciplined in their training. They do it to win a prize that will fade away, but we do it for an eternal prize. 26 So I run with purpose in every step. I am not just shadowboxing. 27 I discipline my body like an athlete, training it to do what it should. Otherwise, I fear that after preaching to others I myself might be disqualified.
The Apostle Paul 1 Corinthians 9:24-27 (NLT)

Paul points out that the stakes for our race are much greater than that of an athlete seeking earthly gain or gladiator fighting to stay alive. In spite of not being an athlete, he addresses training his body so that it will “do what it should.” Why does he make this point? Because living the Adventure God Made You For requires much of your body.

Your body needs to be in the best possible shape so it is ready do what you need it to do, when you call on it.

Imagine a firefighter who was not in shape to climb ladders and haul around heavy equipment? Or a businessman who falls asleep in meetings or finds himself in the hospital with heart problems? Paul is calling us out to be physically fit for the job at hand…. Just like those gladiators who made it a priority to train physically, learn fighting techniques and eat a high energy plant-based diet so they could be in top form, ready for the fight. Then Paul raises the bar.

“Physical training is good, but training for godliness is much better, promising benefits in this life and in the life to come.”
The Apostle Paul in 1 Timothy 4:8 (NLT)

Yes…. train your body so that it is capable of doing what you need it to do; you are its boss after all. But, even more so, he says:

Train your mind in the ways of God.

In addition to all of their other training, I imagine the gladiators also did things to become smart and mentally tough. Every part (mind, body, soul), their entire self, had to be in the fight because the stakes were so high. Paul agrees! The fight of our lives calls for us to be all in…the stakes are high!

“And so, dear brothers and sisters, I plead with you to give your bodies to God because of all he has done for you. Let them be a living and holy sacrifice—the kind he will find acceptable. This is truly the way to worship him.”
The Apostle Paul in Romans 12:1 (NLT)

Your training must start by taking in the word of God to train yourself up in it. Everything else will follow along once you get that first part going and become obedient to it. My friend Brad uses putting on a button-down shirt as an analogy – Once you get the first button in the right hole, everything else falls in line. It may not have occurred to you, but the scriptures are clear; God wants your body to be in peak shape. Here’s a challenge for you:

I’ve never been much for making New Year’s resolutions. I’ve always felt that if something makes sense to change, why wait? But it happens to be that time of year, so why not make a resolution? Here are a few questions to challenge you:

Paul helps us to remember the incredible thing that happened when we accepted Christ.

“Don’t you realize that your body is the temple of the Holy Spirit, who lives in you and was given to you by God? You do not belong to yourself, 20 for God bought you with a high price. So you must honor God with your body.”
The Apostle Paul in 1 Corinthians 6:19-20 (NLT)

A high price was paid for you and you no longer belong to yourself. These are hard words to accept…it’s a lot easier to let yourself slip. But, to live out the Adventure God Made You For, you will need to take the steps to honor God with your body, so it will be there to do what you need it to do when you call on it.

Is it time to raise the bar, to Reach New Peaks for God? Engage The Mission Curve™ Process and find your path into the Adventure God Made You For. Let’s talk.